Exact Sciences is No. 1 gainer among Wisconsin stocks in 2017 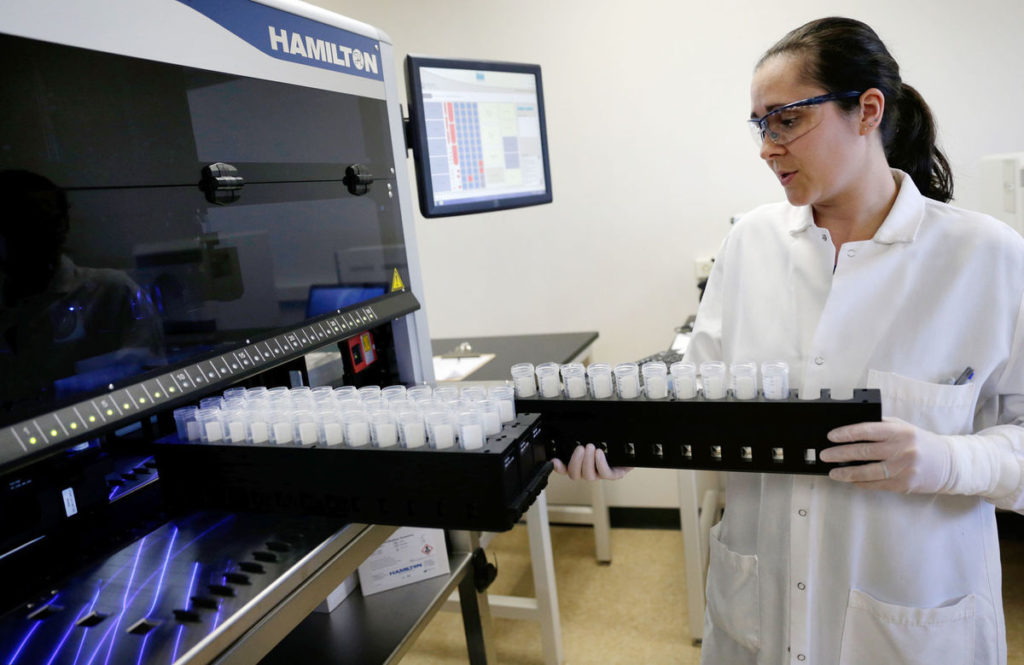 As the stock market climbed to record heights for a second straight year, more Wisconsin stocks went up than down in 2017.

But no percentage increase was anywhere near as big as that of Exact Sciences Corp.

With Cologuard use continuing to expand, and tests in the works to find several other types of cancer, Exact is “the most intriguing diagnostic company in the market at this time,” analyst Brian Weinstein, with the William Blair investment firm, wrote in a research note Monday.

Weinstein said there’s good reason for Exact’s stock to have advanced. “Our view on the stock performance is management continued to execute at near flawless levels in 2017,” as the revenue, number of tests completed and physicians signed up kept growing, even beyond the company’s projections, he said.

“In addition, progress on the (product) pipeline gives another leg to the story which is beginning to be appreciated,” Weinstein said.

Baird investment firm analyst Catherine Ramsey Schulte lowered her rating on Exact stock to “neutral” in November, but said it is “not a reflection of decreased confidence in the business but rather in response to the sharp rally in the stock over the (previous) several weeks.”

Investors also pushed up the stock prices of several of Wisconsin’s industrial companies. Shares of Twin Disc, a Racine company that makes power transmission equipment, rose 82 percent over a year ago to close the year at $26.57, while crane manufacturer, The Manitowoc Co., saw its stock increase 64 percent, closing at $39.34 on Dec. 31.

Shares of Sonic Foundry, whose Mediasite software and hardware are used to stream video, ended the year at $3.01, down 39 percent from the previous year, while work-clothing company Duluth Holdings saw its stock dip 30 percent to $17.85 a share.

Spectrum Brands announced earlier this month that it plans to sell its batteries and personal appliances division this year. That unit — which includes the Rayovac brand that formed the basis for the varied consumer products business that Spectrum Brands now encompasses — makes up 60 percent of the 670 jobs at its Middleton headquarters.

Shares of Orion Energy Systems, a Manitowoc company that makes energy-saving lighting systems, staged the largest percentage decline among Wisconsin stocks, falling from $2.17 at the end of 2016 to 88 cents one year later.

Overall, of 52 Wisconsin stocks trading at more than $1 a share for the full year, 16 ended the year at lower levels than they were a year earlier, or nearly one of every three.

On average, their stocks rose 17.7 percent. “I don’t think you can say anything negative on a year where the average company returns are almost 18 percent,” Schoen said.

Wisconsin doesn’t have many tech-related companies that are publicly traded but it does have quite a few machinery companies, and industrials also did well.

Rockwell Automation was the highest-priced Wisconsin stock, ending 2017 at $196.35 a share, a 46 percent increase from a year ago, as the Milwaukee industrial controls company repeatedly rejected takeover offers from Emerson Electric Co.

Rockwell shares had climbed as high as $210.72 in October.

Local companies
Of the stocks based in the Madison area, Lands’ End, Alliant Energy Corp. and Cellectar Biosciences were gainers in 2017, in addition to Exact Sciences.

With Jerome Griffith taking over as CEO last March, the Dodgeville clothing and home goods retailer reported its first quarterly profit in two years in its 2017 third fiscal quarter. And it has claimed some other industry coups: In November, the company announced a two-year agreement to outfit The Weather Channel’s staff when they report from the field, and just last week, Lands’ End was chosen to supply uniforms for American Airlines.

Lands’ End said Monday it will open a new store concept in Chicago this year and plans to open 40 to 60 stores over the next five years.

Another Wisconsin apparel company, Duluth Holdings, parent of Duluth Trading Co., saw its stock struggle a bit in 2017, falling to $17.85 from $25.40, a year ago. Duluth Trading opened 15 stores this year and now has 31, with many more to come. Sales keep rising, but the company reported a third-quarter net loss as expenses have increased with the store openings.

Analyst Andrew Burns of D.A. Davidson & Co. said he thinks adding stores is “the right strategy” for the traditionally online marketer. “If you’re an e-commerce retailer, you know where your customers are. There’s a high probability of success for opening new doors,” he said.

Even Amazon is adding stores with the purchase of Whole Foods, he said. “A balance of e-commerce and brick-and-mortar stores is the future of retailing,” Burns said.

Alliant is a “high-quality utility” that is “well-positioned” to increase its dividend, Edward Jones analyst Andy Pusateri wrote in a Jan. 3 research note, rating the stock a “hold.”

Cellectar, a biopharmaceutical company, has started testing its compounds on patients in clinical trials. Its stock closed at $1.37, up from $1.22 a share, a year ago.

Coming in 2018
For this year, Schoen said Baird’s projections are “cautiously optimistic.”

“There are so many positives from a market standpoint,” she said. Schoen cited strong economic growth, lower unemployment, tax reform and recovering global markets.

The risk of a recession is low, she said, but added: “There are definitely risks out there that we’re watching.” Schoen said if interest rates rise quickly or corporate earnings start to slow, they could “pressure the market.”

And there could be some volatility, Schoen said, adding, “Don’t think we’re going to have 20 percent or 30 percent returns every year.”

In the first days of 2018, the Dow Jones industrial average topped 25,000 for the first time, and the S&P 500 and Nasdaq composite closed at all-time highs.

Facebook
Twitter
WhatsApp
Linkedin
Email
Print
Previous articleHow Much Should You Invest in Stocks?
Next articleStocks are at an all-time high. Is it too late to get in on the action?