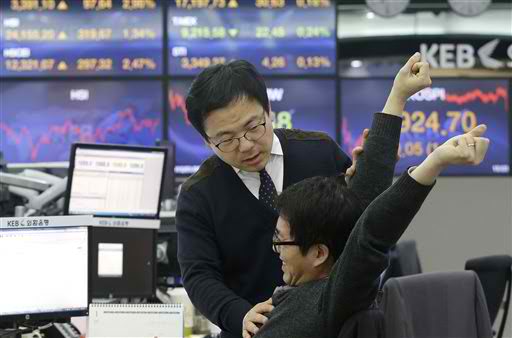 Asian markets rose on Thursday after the U.S. Federal Reserve raised interest rates for the first time this year.

Japan’s Nikkei 225 rose 0.84 percent and the broader Topix edged up by 0.46 percent, with the mining and oil sectors climbing 4.5 percent and 2.8 percent, respectively, in early morning trade.

Meanwhile, the Hang Seng Index was up 0.45 percent. Over on the mainland, the Shanghai composite tacked on 0.18 percent and the Shenzhen composite added 0.27 percent.

In Australia, the S&P/ASX 200 reversed losses seen earlier to drift higher by 0.02 percent as declines were seen in all sectors except energy, materials and gold producers.

Mining majors traded firmly in positive territory, while oil producers gained on the back of the more than 2 percent rise in oil prices overnight. Woodside Petroleum gained 2.67 percent and Beach Energy advanced 2.38 percent.

The Federal Reserve raised rates by 25 basis points to a range of 1.5 percent to 1.75 percent at the end of its policy meeting on Wednesday, as was widely expected.

The central bank indicated that it still expected two more hikes this year, but upgraded its projection for the benchmark rate in 2019 to 2.9 percent. Growth forecasts for this year and the next were also raised.

Those moves showed that the FOMC was seeking “to strike a balance between showing a need for more rate hikes in the long term … but not rocking market sentiment too much with the median for 2018 staying at three hikes,” Tai Hui, chief market strategist for Asia Pacific at J.P. Morgan Asset Management, said in a note.

He added that the lack of surprises on Wednesday meant that stock markets in the region would likely be relatively muted.

U.S. stocks whipsawed in the last session, touching session highs shortly after the Fed made its announcement, but ultimately closed slightly below the flat line.

Following the hike stateside, the Hong Kong Monetary Authority on Thursday also raised its base rate by 25 basis points due to the Hong Kong dollar’s peg to the greenback.

Meanwhile, concerns over trade tensions were also in focus in the region, with President Donald Trump expected to announce tariffs against China during U.S. hours, Reuters said, citing a White House official.

In corporate news, tech giant Tencent Holdings fell 1.77 percent. It had announced that net profit for the quarter ending Dec. 31 rose 98 percent to 20.8 billion yuan ($3.3 billion) on Wednesday. That beat the 16.9 billion yuan average forecast in a Thomson Reuters survey.

In currencies, the dollar remained on the back foot after its overnight fall. Analysts indicated that one reason for the decline was due to some investors having expected the Fed’s “dot plot” to reflect four rate hikes instead of the three that it maintained for this year.

On the commodities front, U.S. West Texas Intermediate crude added 0.2 percent to trade at $65.30 per barrel and Brent crude futures rose 0.14 percent to $69.57. Oil prices had jumped overnight after data on Wednesday showed U.S. crude inventories declined instead of rising, as was expected.

$475M in Bitcoin options expire this week — Are bulls or bears poised to win?

A Giant Hole in the Martian Atmosphere Is Venting All Its...

Experts say you should have 3 times your income saved by...