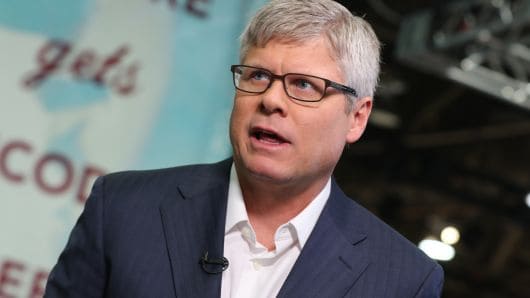 Qualcomm shares jumped in extended trading on Wednesday after the chipmaker reported better-than-expected quarterly results and said it plans to repurchase as much as $30 billion in stock.

The buyback move — an upward revision from the $10 billion repurchase program announced in May — came as a result of Qualcomm saying it would terminate its plan to purchase NXP by the end of the day, when a self-imposed deadline expires. Qualcomm will pay NXP $2 billion if the event is canceled.

Here are the key numbers:

The company said in a statement that revenue in the quarter grew 4 percent from the prior year.

The majority of Qualcomm’s revenue comes from its CDMA Technologies business, which makes chips for phones and other devices. In the fiscal third quarter, that unit produced $4.09 billion in revenue, below the $4.11 billion FactSet analyst consensus.

During the quarter, Qualcomm announced an artificial intelligence research group and the Snapdragon 850 chip for ‘always connected’ Windows 10 PCs.

For its fiscal fourth quarter, Qualcomm said it expects earnings of 75 cents to 85 cents a share, excluding certain items, on $5.1 billion to 5.9 billion in revenue. Analysts had expected earnings of 76 cents and sales of $5.45 billion, according to Thomson Reuters.

“We believe Apple intends to solely use our competitors’ modems rather than our modems in its next iPhone release. We will continue to provide modems for Apple legacy devices,” Davis said on the call. Qualcomm’s president, Cristiano Amon, underlined that point, saying that the company doesn’t expect to be part of Apple’s next product launch.

Shares of Qualcomm stock rose more than 6 percent to $63.20 after the market close. It’s down 8.4 percent this year. NXP stock, meanwhile, fell about 3 percent to $95.65 after market close and is down almost 15 percent since the beginning of 2018.

Qualcomm announced a plan to buy chipmaker NXP in October 2016. The deal was delayed due to regulatory hurdles, including in China, which is in the midst of a trade war with the U.S. Chinese regulators have until late on Wednesday to give final approval. “The environment is obviously quite difficult from a geopolitical point of view, at least right now,” Qualcomm CEO Steven Mollenkopf told analysts on the company’s fiscal second-quarter earnings call.

Executives said the company would repurchase shares of its stock if the proposed $44 billion fell apart. CNBC’s reported earlier on Wednesday that Qualcomm executives were planning to announce a share buyback and were not expecting final approval of the deal.

“The decision for us to move forward without NXP was a difficult one,” Mollenkopf said on Wednesday’s call. “Continued uncertainty overhanging such a large acquisition introduces heightened risk. We weighed that risk against the likelihood of a change in the current geopolitical environment which we didn’t believe was a high probability outcome in the near future. In the end, we determined this was the best path forward for our customers, partners, employees, and stockholders.”

Mollenkopf said the company plans to execute on most of the $30 billion in authorized share repurchases in the current fiscal year, which will end on Sept. 30.

In the fiscal fourth quarter Qualcomm will have ongoing legal costs in connection with hearings for ongoing patent infringement cases against Apple in China, Germany and the U.S., Davis said.

Facebook
Twitter
WhatsApp
Linkedin
Email
Print
Previous articleFacebook pays for all its mistakes at once, and it is a big bill
Next articleUnderground Lake of Liquid Water Detected on Mars

Peloton gears up to hike prices, lay off 800 employees, and shutter stores

How to check iOS app privacy details for iPhone and iPad

Getting started on your 401(k)