The following companies issued announcements overnight which could affect the trading of their shares on Wednesday (Jan 17).

First Ship Lease Trust (FSL Trust): FSL Trust has sold a chemical tanker for US$13.8 million to pare debt. Net proceeds from the disposal will be used in full to repay an outstanding loan facility in the first quarter of the fiscal year 2018, the trustee-manager said in a bourse filing on Tuesday. Accordingly, FSL Trust will record a related impairment charge of about US$9 million for the fourth quarter of 2017.

JEP Holdings: UMS Holdings said on Tuesday it has bought a 7.48 per cent stake in JEP Holdings for S$5.7 million. The mainboard-listed firm bought a total of 109 million JEP shares on the open market, it said in a filing with the Singapore Exchange after the markets closed. UMS’s investment in JEP, a precision machining company, comes a day after JEP said an unrelated third-party has been in talks with its executive directors in their personal capacities over a possible deal to acquire a controlling interest in the company. 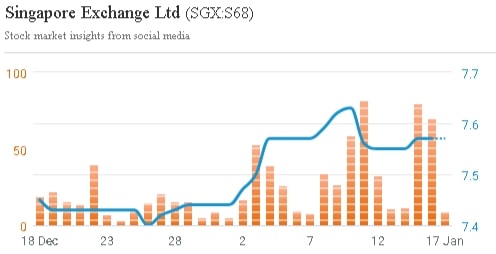 Top Global: The developer has axed its proposed purchase of a pair of adjoining shophouses along South Bridge Road. This was because the condition for a change of use at the second to fourth storeys of the property as “Hotel or Hostel” could not be fulfilled, it told the Singapore Exchange in a filing on Tuesday. Top Global said the termination request was acknowledged, and that it received the refund for the S$265,000 option deposit on Jan 16. In November last year, Top Global said its wholly owned unit, Holland V Investment, was looking to buy the shophouses – 273 & 275 South Bridge Road – for S$26.5 million.

LCT Holdings: LCT expects to report a loss for the second quarter for the fiscal year 2018, it flagged on Tuesday. The group, formerly known as Longcheer Holdings, said that the loss will be mainly due to an increase in maintenance cost for the investment property in Xian, China, based on a preliminary review of its performance. LCT will disclose full details of the group’s financial performance when it announces its quarterly earnings on or before Feb 14.

This stock market ‘presidential predictor’ is forecasting who will win the...